Andrey Zholobov discussed the future of the Russian microelectronics on OTR 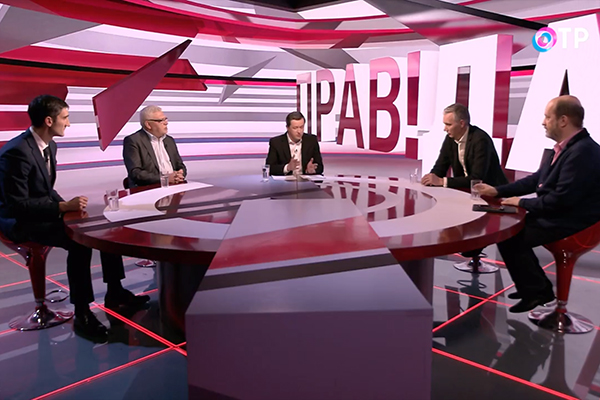 The SAGA Technologies Director General presented as an expert on the «PRAV!DA?» broadcast on the OTR channel.

The main topic of the broadcast was the current state of the modern Russian microelectronics sector and the readiness of the Russian Federation to the «electronic leap» which is marked as the key goal in the Strategy of development of electronic industry in Russia before 2030.

During the heated discussion, the participants came to the conclusion that the society itself and the politicians often substitute the grim reality with the desired «breakthroughs», deceiving themselves and others. The experts marked the difference between the end products made in the Russian Federation and the hardware components using which these products are made.

This is not because of the quality of rare Russian components, they often outpace the market, but because of the production and implementation costs. The business «votes» only with money and thinks using the concepts of economic viability.

On the airwaves of the OTR channel the sentence was announced that now there is no future of microelectronics as a part of Russian industry. At least, at the present day. The participants told that one of the reasons is that when we have the end product, for example, a processor, but there is no relevant «stack» of technologies including software, platform (motherboard) and other microelectronic components.

Consequently, there is no end products with its «ecosystem» on the market. Due to sanctions, the Russian Federation managed to learn to cover its needs in microelectronic products, but this is owing to the limited needs of the national defense system including cyber defence.

When the discussion came over the only positive «breakthrough» – the Elbrus processor, it became obvious that it looks like a character of the cartoon about a teddy bear and honey.

But Elbrus is really complex issue,
Every thing is either there or not,
But Elbrus – I don’t get what’s the reason, –
If Elbrus is there, it is absent at once!

«I will be glad to try to use the devices based on the Elbrus processor in our products, but to be honest I haven’t ever seen it. We produce the industrial equipment, in each device there is a common computer. It is an industrial computer, – Andrey Zholobov noted. – I’ve read that the Elbrus presented its version of computer on MAKS-2019. It is close to Intel i7 in its characteristics. The Windows OS can be run on it. With some drawbacks, convertors, mediums etc, Windows and Linux can be run. This device will cost, roughly speaking, 30 thousand rubles for a computer».

«I am a real consumer of such things, – Andrey Zholobov continued. – I install them into our products and sell to the end user. I’d be glad to consider a computer based on the Elbrus processor. We should at least try it to evaluate its quality. How we can do it?»

The key issue of the discussion asked by Andrey Zholobov, remained unanswered. There is nothing behind the trade shows and large amount of press releases, there is no end product like the Russian made computer. Nonetheless the visitors of the «PRAV!DA?» broadcast noted that even with a complete lack of microelectronics market in Russia there is a demand for 10-15 millions of devices per year (PC displays and system units), where microelectronic products are essential.

«The 130 nm workmanship factory will be launched not before mid 2022,» – summarized Andrey Zverev, assistant under secretary of the Head of the Russian Government Yury Borisov. But he humbly left unsaid that this workmanship was achieved in 2001 and is now is fully obsolete, at the moment there are 5 nm workmanship developments and a few 3 nm pilot prototypes.

You can see the recording of the broadcast and the verbatim at the OTR TV channel site (Russian Public Television).